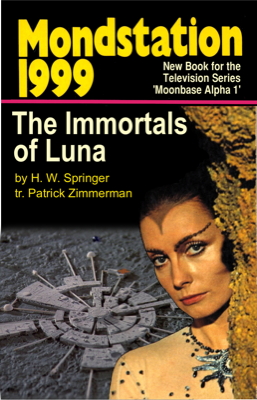 The Immortals of Luna begins with the sudden appearance of lifeform readings on the Moon's surface. Koenig, Carter and Dr. Russell fly an Eagle to the area to investigate, finding three aliens and no space ship. The aliens, believing they are under attack, disrupt the Eagles power, crashing the Eagle onto the surface of the Moon. The aliens realize their mistake and help out the Alphans, but only because it will further their own agenda.

Upon realizing that the Eagle has crashed, Tony and Maya head out to investigate. Arriving at the crash site, they find that everyone is alive and that the new found aliens are friendly. However, Koenig distrusts the aliens and has Tony and Maya stay behind to search for the supposed crashed alien ship while the aliens are brought into Moonbase Alpha.

Tony and Maya are able to find a way through a forcefield that was hiding the Magaron spaceship from the Alphan sensors. Inside the ship, Tony finds roomfuls of Earth artifacts as well as a room of hundreds of cryogenically frozen humans that have been taken from the Earth during the past several thousand years. The Magarons, realizing Tony and Maya have breached the spaceship, seize control of Alpha and place everyone into stasis.

The Alphans awaken an unknown amount of time later and find themselves still inside Moonbase Alpha. However, on closer inspection, everyone realizes that this Alpha is just a mock up...

The third novel from H. W. Springer is a lesser story compared to the prior two entries. Perhaps writing several full length novels in a few short months took its toll. This novel starts with an interesting premise, wherein three powerful and nearly immortal aliens suddenly appear on the surface of the Moon. However, the remainder of the novel is a stale science fiction cliché - the Magarons have been studying the people of Earth and are whisking them away to Magaron to live in a zoo of mockup domiciles. Another inadequacy of the story is that the Magaron people are supposedly studying Earth men due to their similarity in genetic makeup as well as historical development, but neither aspect is touched upon in even a superficial manner. The reader is also lead to think that Maya's abilities as a metamorph will somehow play a role in saving the Alphans, but this never comes to fruition and the story ends abruptly and awkwardly.

Additional demerits against the story are due to several similarities to ideas from Year 1. The first is that the Magarons tell Koenig that their ship was programmed to travel to the Moon, as it was the stopover destination prior to traveling to the Earth. Koenig, however, dismisses this answer, believing it impossible for even an advanced alien ship to have found the wandering Moon - contradicting the events and attitudes of the Year 1 episode Earthbound. The overall story is also reminiscent of Missing Link from Year 1, although here it plays out into a far less satisfying story.

Several new characters are introduced and the reader is also treated to the return of several from The Andromeda Mystery. Again, both Mark Macinlock and Jameson play small roles, although Jameson is finally allowed to do more than just ask if he can press the 'fire' button of the Alphan laser cannons. Reference to the events of The Andromeda Mystery are made, with Koenig wondering if the three Magarons will be just as dangerous as the Dju. Another passage that is fascinating is the reference to the fictional character Winnetou. Popularized by Karl May (1842 - 1912), an all time best-selling German author, Winnetou is a North American Indian character living in a romanticized Wild West. He appears multiple times throughout Karl May's output of 20 plus novels about the American West and he is credited with heavily influencing the European view of the U.S. frontier. Winnetou also appeared in numerous German movies in the 1960's that were adaptations of Karl May novels. Although incredibly popular in Germany and throughout Europe, Karl May and his characters are unknown in America.